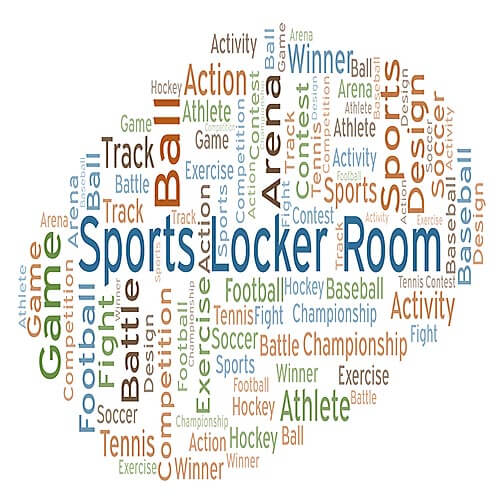 If you are like most people, you immediately notice the foul odor when you step into a locker room. If you spend a lot of time in locker rooms then you probably wonder how to eliminate locker room odors and what causes these smells. The foul odors that you smell in locker rooms are a combination of sweat and steam and are made even worse by the heat and humidity that is so common in these places. Not only do players sweat/perspiration in their clothing, which can smell bad on its own, but then the clothing is left to dry out in a hot and humid environment, which will allow bacteria and germs to multiple and create a foul odor. Locker room odors aren’t just offensive when they are fresh due to sweaty players coming into the space, they will also linger and cause problems and bad smells in the future. This is because over time the odors will build up, bacteria and germs will flourish, and it will get harder and harder to get rid of the smell. Microorganisms in locker rooms grow quickly, which means that in order to combat the smells and odors, you will need to have a plan in place of what you will do to treat the locker room surfaces and air.

Unfortunately, in the fight of how to remove locker room smells, you can’t simply rely on a deodorizer to cover up the smell. While chlorine and bleach may seem like a great option, these are simply deodorizing the smell, but they don’t actually tackle the odor at its source, which means that it will continue to smell awful. The chemical smell may be appealing at first, as this will smell clean, but it will quickly fade. Some deodorizing sprays will cover up the odor while others encapsulate the bacteria that are causing the odor, but these sprays do not actually kill the microbes that cause the smell. Much like using a deodorant will only get the of the smell of a person’s sweat but an antiperspirant will stop the odor from occurring,

using the right product in the fight against locker room odor is important for the best possible results. Antimicrobial products actually kill the cause of an odor, but over time they will wear off. This means that while you will be able to combat and kill odor-causing bacteria when you first spray your product, over time the product will not work as well. This is because the protection left behind on surfaces will eventually wear off. There is a much better way to deal with bacteria and odors in your locker room Microorganisms in the locker room will multiply quickly, causing bad odors that need to be dealt with right away and correctly in order to get rid of the smell. Simply covering up the odors isn’t enough. If you have been wondering how to get rid of locker room odors, then it is time to turn to hydroxyl processors. This equipment is able to produce a massive amount of hydroxyl molecules in the locker room and release them throughout the space, which will deodorize the air while at the same time purifying it without using any harsh and dangerous chemicals. This means that your air will not only smell a lot better, but it will also be much healthier for people to breathe.

Just like an antiperspirant will keep you from smelling rather than just masking body odors, a hydroxyl processor from Odorox/Pyure will be able to constantly prevent bacteria, mildew, and mold from forming and growing in the locker room. This means that no matter how dirty the gear and uniforms are, how humid the space is, or how damp the air is, these processors can get rid of the odor causing microorganisms in your locker room. One of the main reasons to consider hydroxyl processors in your fight against locker room odor eliminator how to is that this equipment is environmentally friendly and won’t release any dangerous chemicals into the air. Instead of your locker room smelling like sweat/perspiration, bleach, chlorine, or mold, when you use this equipment, you will enjoy a clean and fresh scent. Additionally, you won’t need to worry about any bacteria growing and producing odors in your space.

The Leonia Board of Education began using the Pyure technology in 2018.

Our districtÕs goal was to improve the indoor air quality in our school buildings. We have been very satisfied with the equipment and the results. When the pandemic broke out in the winter of 2020, we began using the equipment in almost all areas throughout our school district. We knew we needed to increase custodial cleaning and district wide disinfection, however adding the Pyure Odorox technology only increased our overall goal. In March of 2020, we implemented more Pyure Odorox units and have been very satisfied with the results. We intend to have Pyure’s equipment play a major role in our return to school efforts as we move along in the pandemic this winter season.

I welcome any questions and fully endorse the Pyure technology for any school.

It has been almost a year since we first met at the International Home Show and you introduced me to the benefits of the Odorox decontamination technology. After almost one year of trialing your product and purchasing equipment, I'm pleased to provide you with an update on our success year to date.

INDOOR POOL RESTORATION PROJECT
During the retiling of our indoor pool last spring we smelled a very nasty odour off-gassing during the excavation process and it was negatively affecting some of the common areas which our tenants use for private parties and other events. After contacting your company, you were able to make a site visit and bring us 3 machines to trial to help mitigate the odour. We placed an Oasis in the common room and used two Boss units in the adjacent hallways and elevator corridor and were able to successfully eliminate the odours in only a few hours. It was amazing and we were able to keep the Oasis in the common room during the restoration project ensuring that our clients had no ill effects from the smells during the entire construction project.
TENANT CONDOS
Subsequent to completing the pool project, we were able to successfully remediate odours such as smoke and other unwanted smells by placing your equipment right into the condo units as problems arose. The nice aspect of the technology is that it is safe to place while the unit is occupied yet removes odours such as smoke not only from the air, but from the carpets and walls. This saves us money without having to call in outside contractors to remediate our properties.
GARBAGE ROOM
Obviously one of our concerns with respect to garbage rooms is both, odour and safety and like any Other property manager, there have been times when unwanted smells have seeped up through the garbage chutes negatively affecting tenants on the first few floors. We placed one of your Boss units into our main garbage area and were amazed that after one or two days that the odours were completely eliminated. The machine has now been operating for 8 months and we have had to do nothing but leave it on site running. There are virtually no electrical costs since the equipment operates on less than 2 amps. Since start-up we have eliminated the need to purchase chemicals and other odour remediation products. The added feature that your equipment also eliminates surface bacteria and air-borne viruses without touching them helps us ensure that no unwanted pathogens find their way from the garbage room to our tenants via the garbage chutes.

IN CONCLUSION
I was very skeptical when I first heard about your product line at the Toronto show. Truthfully it is impossible to believe that you can simply plug in a machine and not only get the smells out of the air, but as well walls and ceilings or anything else without touching it. You proved me wrong!


This condominium is a very high end building with some owners paying several million dollars for their suites. After using chemicals and other masking agents to try and protect the expected smells and odours common when dealing with garbage, it is great to finally own a product that is maintenance free, GREEN, and that can be used for many different applications.