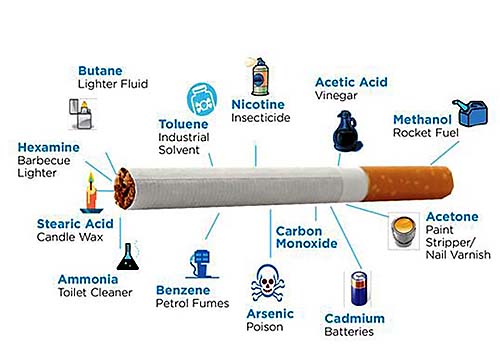 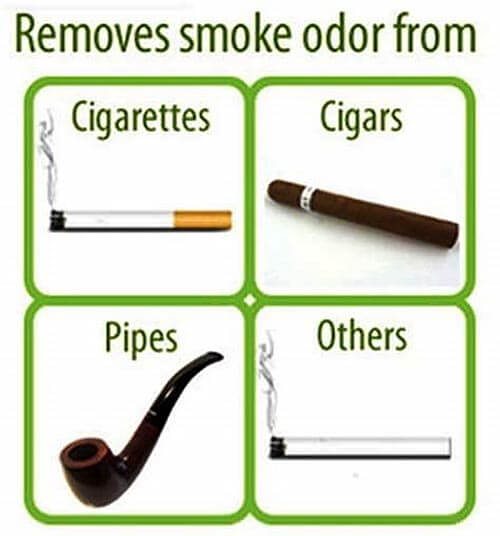 Anytime someone smokes inside a home or other building, all of the smoke and nicotine released can actually stick to the carpets, linens, upholstery, walls and screens in the home, creating an unpleasant smell that is difficult to get rid of. The resin and tar from cigarettes are very difficult to deodorize, leaving many people wondering how to get rid of cigarette smoke odor. Depending on the extent of the smoke damage, you may need to replace carpets, repaint your walls, and purify the air in order to completely eliminate any odor that was left behind. Cigarettes don’t only contain tobacco and nicotine – they are also packed with many other toxins and chemicals. Even though cigarettes now have filters and often have safer ingredients, people who smoke are exposing themselves to more than 250 potentially poisonous toxins each time they light up. When they smoke inside, this smoke is able to linger. All of the toxins from cigarettes remain in the air and can create a “coating” effect on anything in the home.

Just like walking through the fog will make your clothing damp due to very small particles of water, cigarette smoke has small particles of toxins floating in it. If you want to know how to eliminate cigarette smoke odor, then it’s important to understand how this works. Walking through the fog once will make your clothes slightly damp, but continuing to do it will cause your clothing to get wet. In the same way, being exposed to third-hand smoke will allow particles to form on surfaces in the home. Each cigarette smoked causes more particles to be released, making more and more of them create a smoke odor that is hard to get rid of. Smaller spaces, such as cars, will have more smoke build-up and there will be more toxins in the air and on the surfaces in the vehicle.

Many people who are wondering how to eliminate cigar smoke odor think that they can simply leave a window open to allow the air to blow through and remove the smoke. Unfortunately, this smoke is very sticky and will remain in your home. Smokers tend to have the same level on toxins emitting from their hair and skin as their home or car do. This means that you don’t need to actually breathe in cigarette smoke to be affected by the toxins. It’s important to know that the size of your room, the amount of ventilation in the space, and how much airflow there is will all play a role in how quickly you can rid the space of the odor. Take these into consideration when thinking about how to get rid of cigar odor. Chemicals and toxins will seep into items in your home, including carpets, upholstery, and other fabric. The fibers of the cloth will trap the cigarette odors, making them harder to get rid of. The number of cigarettes smoked in a space will play a huge role in the overall odor, as more cigarettes will release more toxins.

When wondering “what can I use to get rid of smoke odor,” make sure that you consider using an air purifier, as they are the best at eliminating the odor. An Odorox/Pyure Hydroxyl Processor is the best way eliminate the odor at the source by relying on hydroxyls to attack odors throughout the space, not only in the air that enters the machine. This is the most reliable way to get rid of smoke odors and ensure that they are not still trapped in your furniture or clinging to your walls. Ventilating the room is a great way to help remove the odor of cigarette smoke, but it won’t remove any of the toxins or chemicals that are in the space, which is why it’s important to use the right equipment for the job. No matter whether you are a smoker who wants to improve your home, office, or car, or you just moved into the home of a smoker, you need to take steps to remove the smells and chemicals left behind. Understanding how cigarette smoke works, what it contains, and how to best remove it will give you the knowledge that you need to improve the air quality in your space.

After researching many air purification solutions on the market today, we chose the Odorox hydroxyl processors for the myriad of areas where we host our students. Many of our special services were open and operational during the first few weeks of the pandemic. The Odorox Pyure hydroxyls provided a sense of comfort for our staff and parents while mitigating the risk of exposure and spread of the virus.

We have been regularly using it in addition to our enhanced disinfection protocols as we are determined to provide a safe, secure, clean, and healthy environment as best we can during a pandemic.

Our administration and maintenance staff are thrilled with the performance and are looking for even more ways to utilize the technology.